Robert Whittaker looks to make it three in a row when he faces Kelvin Gastelum in the main event of UFC Vegas 24. Cageside Press has its picks set.

Former middleweight champion Robert Whittaker continues on his path back to the title in the main event of UFC Vegas 24 against Kelvin Gastelum. Whittaker is 2-0 since falling to Israel Adesanya, defeating Darren Till and Jared Cannonier. Gastelum, who is replacing Paulo Costa, recently snapped a three-fight losing streak against Ian Heinisch. Whittaker was unanimously picked.

After an intense weigh-in, veteran Jeremy Stephens faces Drakkar Klose. Stephens has lost his last four fights (with a no contest against Yair Rodriguez in between) while Klose had his three-fight win streak snapped by the red-hot Beneil Dariush. All but two writers picked Klose.

Veteran heavyweight Andrei Arlovski battles Chase Sherman who recently returned to the UFC. Arlovski was quickly beat by up-and-comer Tom Aspinall last time out, snapping a two-fight win streak. Sherman had three knockout victories after getting cut from the promotion in 2018, then knocked out Ike Villanueva in his return to the Octagon in May. All but two writers picked Arlovski.

Jacob Malkoun looks to get back his unsuccessful debut when he takes on Abdul Razak Alhassan. Malkoun, a training partner of Whittaker, was knocked out by Phil Hawes in 18 seconds in his debut. Alhassan has lost two straight after a strong start to his UFC career. Alhassan was unanimously picked.

Alex Munoz is in the same position as Malkoun, coming off a tough debut loss and facing Luis Pena to open the UFC Vegas 24 main card. Pena has lost two of his last three, falling to Khama Worthy last time out. Munoz lost a decision against Nasrat Haqparast in his debut. Munoz was slightly favored, receiving six of 11 picks. 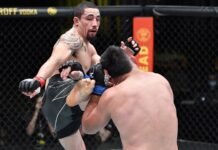