A full seven fights comprised the UFC Vegas 23 televised preliminary card on ESPN on Saturday — and that portion of the event was kicked off by a pair of light heavyweights. Following up Kasanganay vs. Palatnikov on UFC Fight Pass, Da Un Jung and Contender Series alum William Knight threw down, with both looking to build momentum.

South Korea’s Da Un Jung had fought to a draw with Sam Alvey in his last outing, but remained undefeated in the UFC. Knight, meanwhile, had won his octagon debut in September, earning a unanimous decision against Aleksa Camur.

Early on in the fight, Knight initiated a takedown attempt, but was held up by Jung. In the clinch, Jung was able to turn the momentum and took Knight down himself. After over a minute of top control for Jung, Knight was able to pop out of the position. After a click, Knight got back in the clinch and was promptly taken down again. Jung rode out nearly the remainder of the round in half guard, before a bloodied Knight was able to stand up with two seconds left.

Knight was firing big shots to start the second round after losing the first. A minute in, Knight shot for a takedown and again was held up then taken down by Jung. This time, Jung had back control against the cage. Jung was able to move him off the cage and flatten Knight out. Ground-and-pound started raining down as Jung got his hooks in. Knight fought through a few referee warnings to survive a dominant second round for Jung.

A few overhands found the mark early on for a desperate Knight, but Jung put an end to that with a clean double-leg takedown. Knight spun out of the position, but was brought down from the clinch twice in quick succession. Jung moved from side control to north-south, then back to side control as he peppered the body of Knight with short elbows. Top position was locked in for Jung as Knight was fatigued at this point. After not shooting for a takedown in his first several fights in the UFC, Jung dominated the fight with his wrestling. 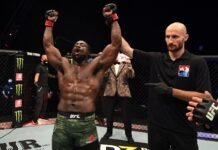