Uncasville, CT — Now a full-time member of the Bellator roster, Kana Watanabe certainly made a strong first impression with North American fans on Friday. Or second impression, perhaps, after appearing on a RIZIN/Bellator hybrid card in late 2019.

Watanabe (10-0-1) fought on U.S. soil for the first time when she took on ex-flyweight title challenger Alejandra Lara at Bellator 255. Lara had entered the bout on a two-fight win streak, and did not make things easy on the Japanese fighter. But key takedowns, especially in the third round, gave Watanabe a split decision victory.

Following the bout, Watanabe told media outlets including Cageside Press that she “didn’t really get to work on her game plan.” But despite that, she was “very happy with the decision.”

“Expect more striking from [me]” moving forward, Watanabe said via translator, adding that she’s “going to be gunning for the championship.”

Ahead of the fight Friday, Watanabe had been ranked at #5 in the women’s flyweight division. Lara sat in the #4 slot. That’s likely to change next week, when the promotion’s new official rankings are updated. With that in mind, the Japanese fighter “just wants to fight someone that’s higher up in the rankings.” 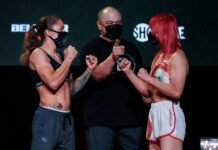