Jamie Mullarkey had made the long trip from Australia to Las Vegas to battle “The Deathstar,” Khama Worthy. And while Mullarkey was saddled with an 0-2 record in the UFC prior to UFC 260, the promotion had enough confidence in the pair to have them kick off the UFC 260 main card on PPV on Saturday night.

Worthy, for his part, was hoping to bounce back from his first loss under the UFC banner.

It was Mullarkey opening up Saturday’s affair with a right hand. In fact, the Australian did most of the heavy lifting in what turned out to be a very short fight. In the end, it was a left hand that landed on the chin of Khama Worthy, dropping him in an instant. Mullarkey moved in for the kill, and after a couple of follow-up strikes, the ref called it a night. No judges necessary, which was no doubt the optimal outcome for Mullarkey after two decision losses to start his UFC career.

The death star was destroyed, Mullarkey likely saved his job, and more than likely, had thrown his name in the hat for a post-fight bonus as well.

🇦🇺 @Jamie_Mullarkey opens the PPV with a BANG! 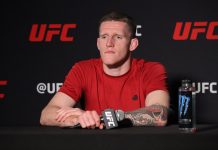