That light heavyweight showdown saw Alonzo Menifield return to action. Menifield was no doubt lucky to still be on the card, after original opponent William Knight was forced out with just days to go until the event. There’s your uncertainty. But then opportunity came knocking on Fabio Cherant’s door, and he was happy to step up on three day’s notice to fill in against Menifield.

Cherant did miss weight for the fight, but by a mere half-pound, which will probably keep him in the UFC’s good graces, given the late notice. What he couldn’t do was pull out a win. Instead, he found himself shocked by a finish few would ever have predicted.

Menifield got right after things on Saturday, punching to close the distance and scoring a takedown on Cherant. That big takedown had Cherant defending with a guillotine. Cherant was still holding onto the guillotine after being firmly planted on his back, Menifield on top. Which allowed him to make Cherant tap with a Von Flue choke.

Whatever you call it – @AlonzoMenifield just got it done 😱 #UFC260 pic.twitter.com/1eLTs11ZZY

With the shock finish at UFC 260, Alonzo Menifield becomes one of four fighters to win via Von Flue choke in promotion history. 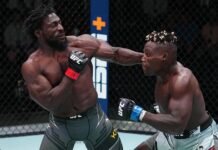