According to a report from Combate, No. 8 Shamil Abdurakhimov will fight No. 9 Augusto Sakai at a UFC event on May 1. Abdurakhimov later confirmed the bout via social media.

Abdurakhimov (20-5) has not fought since his loss to Curtis Blaydes at UFC 242, which took place on Sept. 19, 2019. It will be more than a year since the Dagestani fighter has competed. He was scheduled to compete twice against French UFC phenom Ciryl Gane in 2020, but each of them pulled out.

Sakai (15-2) tasted defeat for the first time in his UFC career last time out. In his first main event against MMA legend Alistar Overeem last September, he lost via TKO in the fifth round. Before his most recent loss, the Brazilian was riding a six-fight winning streak.

Both fighters need a win to keep their spot in the top ten.

No official location, venue, or broadcast details have been announced for the UFC’s May 1 Fight Night event. The following bouts have been reported for the card thus far: 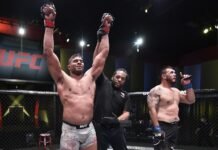