For UFC Fight Island 8 we will take a look at some fighters with only a few (5 or less) fights in the UFC, rather than those fighters that are long-time UFC veterans with a bunch of finishes with the promotion.

Mounir Lazzez is a very long welterweight (standing at 6’1″ tall with a 76″ reach) and uses his physical traits to his advantage very well. Lazzez is a striker with all of his finishes coming by way of KO or TKO in his pro career. Lazzez is a hard fighter to time, with his punches and kicks flowing smoothly but not rhythmically. A tricky attribute for a striker. Mounir has great high kicks in his arsenal and is very dangerous within the clinch with his knees and dirty boxing being something to look out for. Lazzez is also good at mixing strikes to the body and head so that Mounir keeps his opponent guessing.

In Mounir’s most recent fight, in July of last year, he won his UFC debut against Abdul Razak Alhassan by unanimous decision. It was a great fight and displayed that Lazzez has the capabilities to hang with some very good caliber UFC guys.

This might’ve been one of the highlights Dana saw of Mounir Lazzez #UFCFightIsland1 pic.twitter.com/WbgNdXtaCg 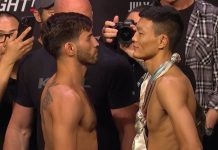