After UFC Fight Island 7 last Saturday the octagon is back in use on a Wednesday for UFC Fight Island 8. The card is headlined by two welterweight contenders in Neil Magny and Michael Chiesa. Also on the card, loads of rising up-and-comers and a slew of UFC debuts. After earning a contract last Summer on the Contender Series Victoria Leonardo was making her debut against the also debuting Natalia Silva. Unfortunately, Silva had to pull out and now Manon Fiorot will be making her debut against Leonardo.

How will Fiorot fare in the UFC:

Fiorot may only have a few MMA fights but before transitioning to MMA she spent time in boxing and karate. In fact, she was a two-time French kickboxing and Karate champion and was the IMMAF 2017 amateur world champion in 2017. Fiorot is an excellent fighter on the feet with a wide arrange of skills. Right away you can recognize her extensive karate background as she throws a lot of kicks. Fiorot loves to use the sidekick to the gut to set the tone of the fight and keep the fight at her preferred range. She’s an excellent kicker and that may cause opponents to forget about her hands. The fighter from France is an intelligent striker/kickboxer but a killer all in the same sense. Fiorot doesn’t throw with any wasted motion always picking her shots and always using feints perfectly. She’s got really good footwork and is quick with her feet and her attacks.

While her standup prowess might make you question Fiorot’s other abilities, she is actually a good wrestler. She will beat her opponent up so much on the feet that when she shoots for a takedown they tend to have no idea it’s coming. Fiorot isn’t the most technical grappler; instead she will throw a lot of ground and pound to improve her position. Not a submission threat but she is a threat to stop the fight with ground and pound. Fiorot has major potential where at the very least she could be in the top 15 within two years.

How Fiorot matches up with Leonardo:

Leonardo fought a good prospect in Chelsea Hackett and her experience led her to victory. She did get pieced up on the feet before getting takedowns and ending the fight there. Hackett is good but Fiorot is far more established. On the feet Leonardo is aggressive but Fiorot will light her up coming forward and her movement and speed will give Leonardo fits. Leonardo will have to get this fight down but I don’t see her being able to bully Fiorot around, especially in the clinch where Fiorot is so good at. This should be a showcase performance for Fiorot. 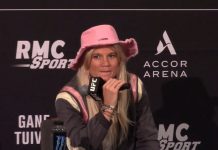 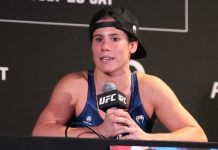 UFC London: Victoria Leonardo’s Surgeon Made Trip to England With Her 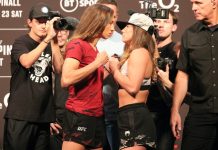