Just hours before start time, a fun middleweight scrap has been removed from UFC Fight Island 7.

RT Sport was first to report that Phil Hawes vs. Nassourdine Imavov had fallen off the event. No reason for the loss of the fight was given. Both fighters weighed in successfully Friday, and Imavov’s management team, Management Factory, was still promoting the fight Saturday morning.

Hawes (9-2) had been looking to build on a five-fight win streak, including a victory in his UFC debut back in October. “Megatron” won his way into the UFC on the Contender Series earlier this year, after an earlier Contender Series loss in 2017, and a brief detour to Bellator MMA.

Imavov (9-2) sports an identical record, and was also expected to make his sophomore appearance in the octagon on Saturday. He defeated Jordan Williams in his own debut back in October. The “Russian Sniper,” who fights out of France, has won six straight.

With the loss of Phil Hawes vs. Nassourdine Imavov, the UFC Fight Island 7 card proceeds with ten fights.

Update, 9:15AM ET: UFC officials have confirmed Hawes vs. Imavov’s removal from the card, citing an injury suffered by Phil Hawes. 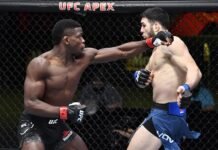 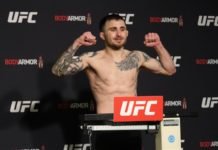 UFC 259’s Jon Anik: Pressure on Both Sides of Nunes vs. Anderson Fight