Cody Durden hopes a change in weight class will lead to his first UFC victory as the 29-year-old drops to flyweight against Jimmy Flick this Saturday at UFC Fight Night.

The American Top Team Atlanta product flirted with the idea of 125-pounds in the past but after speaking to specialists at the UFC Performance Institute, Durden knew that now was the right time.

“I went down to [the UFC PI], got tests done, and really found out more about the science behind my body,” Durden told Cageside Press. “I’ve been following Clint [Wattenberg’s]  advice, and they send me emails through Trifecta. I’ve just really been focusing on the weight and peaking at the right time. I’m ready.”

Durden (11-2-1) is coming off a draw against Chris Gutierrez in his promotional debut back in August at UFC Vegas 5. The Georgia native dominated the first round of that bout, however, he was not able to capitalize on a finish for the next two rounds. Along with a switch in weight class, Durden also spent some time at American Top Team in Florida.

“I just spent a few consecutive weeks down there,” Durden explained. “Really just focusing on fighting. Training two, three times a day. Working on the gameplan and just really getting better. And I just know Kyoji [Horiguchi] can’t tap me out, there’s no way this guy’s gonna be able to submit me for sure.”

Flick (15-5) submitted Nate Smith on DWCS in September to pick up a UFC contract. The 30-year-old will be making his UFC debut and has won five of his last six fights. Despite Flick having 13-career submission victories, Durden feels he can hold his own in the jiu-jitsu department.

“I think it’s going to be a tough, hard fight,” Durden said. “Jimmy Flick obviously he wants to get it to the ground. But I have no problem going to the ground. So I’m confident that if it goes to the ground, I’ll be comfortable there as well.” 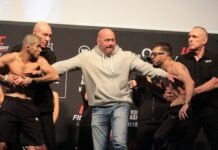 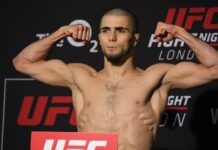 Welcome to the UFC: Muhammad Mokaev 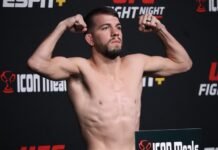