The UFC 257 card headlined by Conor McGregor and Dustin Porier has another thrilling fight with Shane Burgos (13-2) vs. Hakeem Dawodu (12-1). The bout was first reported by MMA Fighting, with Burgos confirming the fight via social media.

Most recently falling to Josh Emmett, Burgos earned a Fight of the Night bonus with an outstanding performance in what many hailed as one of the best fights of 2020. Opposite to him at UFC 257 will be one of Canada’s hottest prospects, Dawodu — a fast twitch kickboxer who has continued to evolve throughout his UFC career.

The featherweight pairing undoubtedly has Fight of the Night written all over it. In contrast to Burgos, Dawodu comes into this bout with plenty of momentum. Now riding a five-fight win streak, incliding a solid win over Zubaira Tukhugov the Canadian powerhouse hasn’t lost a bout since early 2018.

Even though Burgos came up short in his last fight against Emmett, he’s shown elite potential in the UFC. The young featherweight has only lost to the top tier: Emmett and Calvin Kattar, who will be taking on former divisional king, Max Holloway a week before UFC 257. However, Dawodu has been undeniable as of late.

Aside from Burgos vs. Dawodu, who else is on the Jan 23. Card?

Several fights have been slated for UFC 257 on January 23rd. Currently the fights targeted are: 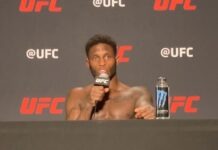