The latest offering from Legacy Fighting Alliance, LFA 95: Browne vs. Estrázulas goes down live November 20, on UFC Fight Pass at 9PM ET. The vacant LFA lightweight championship is on the line. But, let’s take a look at the rest of the card first. Featherweights strap on the gloves, with Bruno Souza (7-1) taking on Guilherme Costa (8-2). Also featured, a pair of flyweights butt heads when Tabatha Ricci (3-0) goes against Flore Hani (2-1). Next to perform, Michael Stack (4-1) versus Jordan Mapa (3-2) is scheduled. Flyweights look to steal the show with Victor Altamirano (7-1) taking on the game Lloyd McKinney (14-6).

Overall, tons of action is set for LFA 95, and it continues with Alex Pereira (2-1) squaring up with Dylan Potter (4-4), in a pivotal middleweight bout. Violence reaches a boil, with co main event athletes in Myron Dennis (17-7) and Dylan Potter (9-4) going to war in a light heavyweight banger. Lastly, the night caps off with the vacant lightweight championship. Arthur Estrázulas (12-4) fights out of Brazil at Kings MMA, and gets to train with top talent like Rafael dos Anjos and Fabricio Werdum. Facing Estrázulas, Nick Browne (10-1) will look to impose his pressure and nullify the Brazilian.

Since Souza started competing in 2014, he has established himself as one of the top prospects at Kings MMA. His seven fight win streak speaks for itself. Now combine that with training at the Machida Academy, Souza is an imposing threat against Costa anywhere the fight goes. With a hiccup in Titan FC, Costa looks to rebound. Also, it’s important to note that Costa is picking up quality training at American Top Team.

Unbeaten upstart Tabatha Ricci will look to extend her win streak against Flore Hani. While Hani appears to have a light record, she has spent a lot of time in the cage. Despite the decision losses, newcomer fights are often dependent on which athlete is more comfortable under the big lights. Overall, this LFA 95 main card bout has some heat behind it but especially because Ricci is undefeated.

Mapa’s aggression is a special thing to watch. On the other hand Stack has a tall order in front of him, but has plenty of knockouts in his own right. However, Mapa’s early onslaught can be overwhelming. Since both athletes are coming off a loss, this promises to be a statement making performance. In essence, Stack has to stop the pressure of Mapa, because if he gets in top position and passes guard — it’s too late.

LFA veteran Altamirano intends to parlay his last decision win into a more decisive victory this time around. Facing the flyweight prospect is Mckinney, who comes in with a wealth of professional experience. In particular his grappling is problematic, shown by his six submissions. Both athletes have slick submissions and chokes and McKinney is undoubtedly dangerous. Soon, fans will find out if Mckinney can handle Altamirano’s elite technique he always brings to the LFA cage.

The Brazillian kickboxer who knocked out superstar Israel Adesanya is making his promotional debut against Powell. Demonstrated by his wealth of kickboxing experience, there is definite pressure for Pereira to perform. However, he’s always excelled under pressure and after his first pro loss, he bounced back well. Facing Pereira is the American, Powell who has shown nasty power in his hands. Don’t blink with this one, because if Pereira delivers, he will be the topic of discussion for many days to come.

Dennis is a diverse athlete who has alternated between kickboxing and MMA bouts. Unfortunately he’s also been alternating wins and losses for much of his career. But things have changed, as the “The Future” Dennis looks to build off his two fight win streak. Conversely, Potter is riding a three fight win streak, and got the job done by strikes in all of them. Since Dennis comes in with a kickboxing pedigree and Potter is known for striking, fans can expect an exciting co main event at LFA 95.

Seven of Browne’s ten professional wins have come by way of a finish. Although his last fight went to decision, when he finishes opponents it’s often in the first round. In the opposite corner, Estrázulas is no slouch training with one of top camps in the world at Kings MMA. The long Brazillian fighter is great on the ground, where his path to victory seems more likely. Certainly one of the closer fights on paper, pressure is on, as the winner claims the vacant lightweight title. 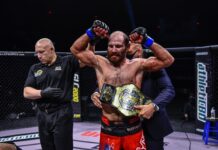 Be It Via the Contender Series or Short Notice, LFA Lightweight Champ Nick Browne Ready for UFC 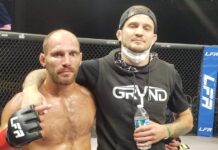