Poland’s KSW returned to action on Saturday, November 14 with a Nation vs. Nation themed event. KSW 56 was billed as “Poland vs. Croatia,” with some of the best fighters from both nations facing off atop the card.

In the main event, former KSW middleweight champion Michael Materla of Poland looked to prevent Croatia’s Roberto Soldic from establishing himself at a second weight class. No title was on the line, but as KSW’s reigning welterweight champion, a win over Materla could lead to a double-champ opportunity for Soldic.

Full results from KSW 56, which kicks off at 2PM ET, can be found below. Head on over to KSWTV.com to watch all the action. 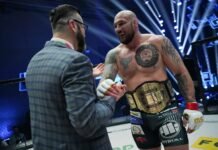