The crown jewel of the event was a welterweight title fight, featuring current champion Kiamrian Abbasov making his first title defense against the up-and-coming James Nakashima. A prospect to watch for some time now, the undefeated Nakashima was looking to break into the big time with the first major title of his career.

Also on the card, the potential of a title shot awaited the winner of the lightweight showdown between Pieter Buist and Timofey Nastyukhin. Buist, a standout Dutch fighter, was labeled one to watch by none other than his countryman and striking legend Melvin Manhoef. Nastyukhin meanwhile might be best remembered for crushing former UFC champion Eddie Alvarez when “The Underground King” made his ONE Championship debut last year.

The Inside the Matrix II broadcast kicks off at 7:30 AM ET. Full results can be found below. A live stream of all the action can be found above, where available.

ONE Championship: Inside the Matrix II Results 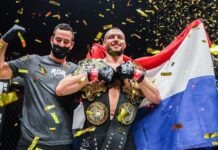