Tito Ortiz is now an elected politician, in addition to being a pioneer in MMA and one of the early stars of the UFC.

During Tuesday’s U.S. Presidential Election, Ortiz was also in the running — for a seat on the city council in his home town of Huntington Beach, California. “The Huntington Beach Bad Boy” has long carried the city’s name, and it comes as little surprise to see Ortiz elected to office as a result.

Ortiz collected 34,901 votes, which was 14.3% of the overall total, per numbers provided by the L.A. Times. The put him first in the running for a council spot, with three positions open.

The former UFC light heavyweight champion has long been a supporter of current U.S. President Donald Trump. He has also remained active in mixed martial arts, operating Punishment Athletics, and competing as recently as last December, when he took on former WWE champion Alberto Del Rio under the Combate Americas banner.

Ortiz, 45, was the longest-serving UFC light heavyweight champion prior to the reign of Jon Jones. Posting a career record of 21-12-1, he defended the belt five times. Known for his rivalry with Ken Shamrock, and a rocky marriage to porn star Jenna Jameson, Ortiz retired in 2012 following a Fight of the Night loss to Forrest Griffin that was closer than scorecards made it seem. Two years later, he would return under the Bellator banner, working his way to a title shot against Liam McGeary in 2015. After losing that fight, Ortiz defeated Chael Sonnen in his second retirement fight — only to return again in fights against another old rival, Chuck Liddell, and Del Rio. He currently sits on a three-fight win streak, and has hinted that there is a chance he could fight again.

When informed of Ortiz winning himself a city council spot, UFC President Dana White responded positively, despite the pair’s rocky history. “Good for him,” White said (via MMA Fighting). “Good for him.” 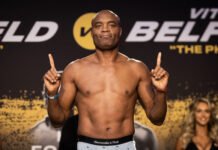