Former UFC light heavyweight champion Tito Ortiz has been fighting off and on in recent years.

Most recently, he dabbled in boxing, and took part in a pre-pandemic scrap under the Combate Americas banner against former WWE star Alberto Del Rio (Dos Caras Jr. of PRIDE fame).

Now, “The Huntington Beach Bad Boy,” 47, is talking about a retirement fight — back in the confines of the UFC.

Fresh off the heels of a troubled political run in his native Huntington Beach, Ortiz has told Helen Yee Sports that he’s looking to wrap up his fighting career against Shogun Rua. The Brazilian, a fellow former UFC light heavyweight champ, is widely believed to have a single fight left on his deal, after which he has stated he’ll also call it a career.

“It’s never over and I think I made that mistake with the UFC when I said I’ll never fight for the UFC ever again,” Ortiz said. “And now that I think about it, that’ll be an amazing last fight for myself and for Shogun Rua.”

“Shogun has his last fight with the UFC, we’re in kind of the same era, so it would be nice to see a Tito Ortiz vs. Shogun. I would like that.”

Ortiz added that he felt Rua won his recent rematch with Ovince St. Preux, which ended in a split decision.

“I have a lot of respect for Shogun, I think he’s an amazing former champion, an amazing fighter. I watched his last fight. I thought he won the fight, but they ended up giving it to OSP. Let’s see what happens in the future.”

Ortiz last competed in combat sports as part of a boxing spectacle under the Triller FC banner last year, going up against Anderson Silva. The match saw him knocked out early by his fellow UFC star.

On the MMA side of things, Ortiz is actually on a three-fight win streak, with wins over Del Rio, Chuck Liddell, and Chael Sonnen. It’s been a decade, however, since he competed in the UFC, where he had a heated rivalry with promotion head Dana White. UFC 148 in 2012 marked Ortiz’s final fight with the company, a decision loss against Forrest Griffin. 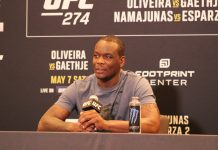 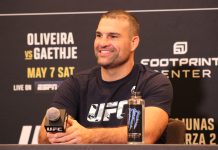