There’s a whole lot of “nope” in this week’s quick hits, between a flesh eating disease and a fighter suffering a chainsaw mishap. Luckily, everyone is alive and well. Or as well as can be. Plus, Brock Lesnar confirms there will be no more MMA comebacks, Rampage is back to coaching, and Drake loses a big bet.

Rampage Jackson appears to have liked playing coach at Triad Combat so much, he’s giving it another go at the upcoming “Freedom Fight Night” event on March 19. The opposing coach? None other than Tito Ortiz.

The event is combining fighting and politics, and will be hosted by another former UFC champ, Frank Mir. It’s attempting to bring together conservative political voices and fighting in an attempt to combat “all the freedom denying mandates in the upcoming 2022 midterm elections,” per a post to Rampage Jackson’s verified Twitter account.

No word yet on who’s fighting, but the Freedom Key Society, who are putting on the event, have been teasing an appearance by Donald Trump, who is listed on the event’s website as an invitee.

Come join, watch, sponsor, or stream the first ever Freedom Fight Night!
MMA legends are joining with political voices for the first time ever to raise money to combat the all the freedom denying mandates in the upcoming 2022 midterm elections.
Two teams coached by me & Tito pic.twitter.com/BQTI7XUY8q

Toronto rapper Drake put down over a quarter mil on Jorge Masvidal to win against Colby Covington at UFC 272. $275,000 to be exact. In related news, Drake should probably stay far, far away from the fight game, at least when it comes to betting.

For the record, in our own staff picks for UFC 272, eight of ten writers responding picked Covington to win.

.@Drake has put over $275K on Masvidal ML tonight 😳 pic.twitter.com/AqmsUB2UPY

Brock Lesnar’s UFC 200 appearance in 2016, a unanimous decision win over Mark Hunt that was later overturned to a No Contest when Lesnar failed his drug test, will stand as his final appearance in MMA.

Lesnar announced the news while speaking to the New York Post.

“That door is closed,” Lesnar told the the Post ahead of a live event at Madison Square Garden. “You know what, Dana White, the Fertitta brothers [Lorenzo and Frank] were exceptional to me.”

But, Lesnar continued, MMA is for the young. “I’m too old,” Lesnar said. “That’s a young man’s sport, and that door is closed. I’m Brock Lesnar, the WWE Superstar.”

Lesnar, 44, finished his MMA run with a 5-3, 1NC record, but in that short career managed to capture the UFC heavyweight championship and defend it twice.

Velasquez, 39, is facing a litany of charges, the most serious of which is premeditated attempted murder, after attacking the suspect of a lewd and lascivious conduct case in which the victim was alleged to have been a family member of the fighter.

After ramming the man’s truck and getting into an 11-mile high speed chase on a highway leading into San Jose, Velasquez opened fire on the vehicle, shooting the wrong man and endangering the life of a woman also present in the truck.

Velasquez was later arrested without incident. The suspect who Velasquez had targeted in the assault was himself out on bail, but had complied with his conditions and had actually been en route to receive a court-ordered ankle monitoring bracelet when the attack occurred.

“It is clear to this court that there is clear and convincing evidence that there is a substantial likelihood that release would result in great bodily injury, not just to the named complaining witnesses in this case but to Santa Clara residents at large,” Judge Brown said (via MMA Fighting). “This case involves allegations of extreme recklessness to human life.

“Ramming a vehicle in the middle of the day where are citizens are out driving, going about their business and shooting out of a car at other individuals, which is reckless by any standard. Anyone could have been injured. Anyone could have been killed and when this court looks at article 1, section 12, it is this level of risk that the court must take into consideration. With that said, this court is making the ruling that the risk is too great and that there will be no bail set at this time.”

The decision won’t sit well with the “Free Cain” movement, comprised of fans and fellow fighters who have come to the former UFC star’s defense. They argue that Velasquez taking the law into his own hands was justified.

Whatever is attacking Pat Downey’s skin, we don’t want it.

Standout wrestler Downey was supposed to make his MMA debut at Bellator 277 next month, but a rash being described as a “flesh eating disease” has forced him out of the bout. That, and he also tore his MCL.

Downey had an allergist diagnose the issue, which is believed to be related to a topical cream he had ceased using. As a result, the Bellator hopeful stated on social media that “I have stopped using all meds and we believe every cream especially cortisone or any other topical/injected, oral based steroid is causing this crazy allergic reaction.”

Eryk Anders will presumably be out for a while due to a chainsaw mishap. The below photo, posted to his Instagram, is probably a blessing in a way, because it could have been much, much worse.

Anyone have the number for the Leftorium? 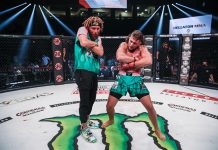 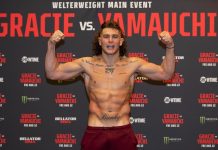 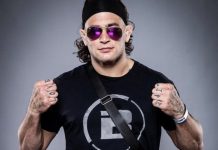 Bellator 284’s Pat Downey: No Pressure Ahead Of Pro Debut, “I’m Coming Out Like A Big Khabib”