Reena Norville is set to make her professional MMA debut on October 10 and does so, leaving behind a well-paying job which put her health at risk.

“I just wanted to get back in shape, I just wasn’t happy with myself,” Norville told Cageside Press recently. “I just walked into a gym one day and basically just fell in love with jiu-jitsu, Muay Thai, all that stuff. I was working with a general contractor, one of the biggest general contractors in the nation. It was just a lot of hours. I loved what I did. But you just get so consumed into something that. It’s good money, but at the same time, you’re taking away from something else. And that happened to be health.”

Norville (0-0) will face Loveth Young at LFA 94 on UFC Fight Pass and explained why now was the right time to move up from her amateur career.

“This whole year has been really tough just trying to find a fight in general,” Norville explained. “COVID has been damper on all sports, really. A lot of the high-level amateurs had just turned pro. And so we had a chance to speak with my coaches. They saw the work that I was putting in and, and decided to just go pro. And then I had the help of my manager, Julian, and Upgrade Marketing he helped me get this fight with LFA.”

Young (1-1-1) is coming off her first career loss to current LFA champion Vanessa Demopoulos at LFA 81 in January. Prior to the setback, the 31-year-old picked up a win and “No Contest” against Invicta FC vet Cynthia Arceo.

Norville has the added benefit of training at one of the best gyms for female training partners in San Diego Combat Academy. Along with current Bellator champion Ilima-Lei Macfarlane, the gym also has standouts Liz Carmouche and Pearl Gonzalez training there as well.

“She likes to stand and bang and so do I,” Norville said. “I think it’s gonna be a finish, honestly some somebody’s gonna finish each other. Obviously, I feel confident in my stand up, wrestling and ground (game). So I feel like I have a really good chance of getting my hand raised” 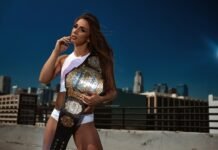 LFA 94: Vanessa Demopoulos Bringing the Little Monster Back for Halloween

UFC Vegas 33: Niklas Stolze vs. Jared Gooden Off, Then On Again