Mandel Nallo’s night didn’t end the way he wanted it to at Bellator 249, but then, the same can absolutely be said of opponent Saad Awad.

Nallo (7-1, 1NC) landed an inadvertent knee to the groin early in the bout. It instantly floored Awad, who after five minutes was unable to continue.

Speaking post-fight at the Mohegan Sun Arena in Uncasville, Connecticut, the Canadian fighter allowed that “as far as the low blow, that’s on me. Crazy stuff happens.”

Which is starting to become the norm for “Rat Garbage.” Last time out, against Killys Mota at Bellator 231, Nallo suffered a freak leg injury. This time around, the low blow led to a no contest. “My last fight, something crazy happened, and now another crazy thing happens. It just seems to happen in MMA. Unfortunately, it’s happened in my past two fights,” said Nallo. “But before the low blow, I felt pretty good.”

Nallo reported that he felt fast, unhittable, and strong in the cage during the fight, as long as it lasted. “One thing that probably people don’t realize, because I look like a wiry little stick bug, is I’m very strong. I felt good in the clinch. I felt energy-wise, everything I was doing was pretty low energy. Everything he was doing, he was revving his engine a little more. So I thought as far as going later into the fight, that was going well as well.”

Nallo recognizes that mishaps come with the territory. It’s the fight business, after all. “It’s a bummer, but if I got over the last one… In a long MMA career, crazy stuff is going to happen,” he stated. “At least I didn’t get food poisoning two days before the fight, that happens to guys. At least I didn’t have a 12 hour layover before. There’s a lot of bad stuff that can happen. This sucks, but I’m in one piece, so you can’t get all bruised up over this.”

Notably, Nallo also took full responsibility for the foul. “I’m not one of these weasely guys that’s going to be like ‘it just grazed him,'” he exclaimed. “It was a big hard knee because I was trying to knock him out with a knee to the liver. So I knew it was hard.”

Once Awad is fully recovered, Nallo hopes the fight can be run back. “It’s a good match-up. I think it’s one that was potentially exciting, so yeah, I think so.”

All the takeaways, meanwhile, are what came before the fight. “This is the first fight under quarantine. Another weight cut, every weight cut is slightly different,” he observed. Which added up to Nallo feeling “the best I have ever felt competing in MMA. I felt very clear-headed. I felt so much more grounded than I normally do in there. A lot of times I’m kind of floating around in there, I’m a little sleepy. I don’t know what it was but today I felt really good.” 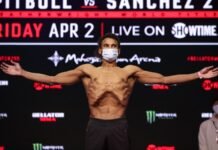 Bellator 255: Mandel Nallo Looking to Remedy “That Taste in People’s Mouths of Me Having Weird Fights” 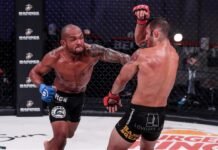