Kyle Nelson is in the midst of one of the longest layoffs in his career and isn’t sure why. Thankfully, the Canadian featherweight will finally step back in the cage opposite Billy Quarantillo at UFC Fight Night: Santos vs. Teixeira on September 12.

“I’m not really sure,” Nelson told Cageside Press when asked about the reason behind the layoff. “My last fight was in September of last year, I won that one pretty quickly and was able to get out without any injuries. We let UFC know that I was ready and in shape. We kept training until around December, and then we hadn’t really heard anything. So I took a little bit of time off, got some laser eye surgery. Then we got that short notice fight against Shawn Woodson and of course that fell through (due to visa issues) but luckily we’re able to get this fight.”

Nelson (13-3) picked up his first UFC victory after finishing Polo Reyes in the first round at UFC Mexico City in September 2019. With the win, Nelson has now won eight of his last ten fights, including a victory over UFC lightweight Khama Worthy in 2017.

Despite the time off, Nelson feels he’s improved in all areas and looks to showcase that against Quarentillo.

“I’ve seen a couple of his fights and the biggest thing that stands out is he’s a survivor,” Nelson said. “He’s able to go in there under fire and kind of take a bit of a beating. But nothing that’s really amazing. The same with his stand up. Like he’s okay, and he’s kind of good all-around, but I don’t see an area where he is going to be better than me. Or that he’s gonna be able to finish me.”

The House of Champions product believes he can knockout Quarentillo and looks to make a statement next month.

“I think on the ground, I think I’m gonna be bigger and stronger,” said Nelson. “He’s a Brazilian Jiu-Jitsu black belt but I’ve been doing Brazilian Jiu-Jitsu for fifteen years now. I think striking wise, I’ve got him beat everywhere and he’ll figure that out soon. He’ll start shooting but when I stuff those shots, he’s gonna be stuck standing with me and that’s when he’ll get knocked out.” 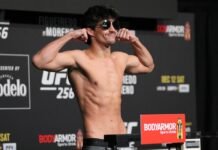 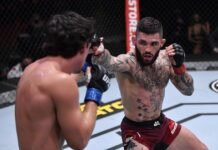 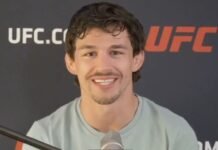