The UFC event on November 28 will be headlined by a heavyweight showcase with major title implications as Derrick Lewis will finally meet Curtis Blaydes in the Octagon.

Per Brett Okamoto of ESPN, a bout between surging heavyweight contenders Curtis Blaydes and Derrick Lewis is set to headline a UFC event on November 28.  The bout comes together after the two have ben mentioning each other on social media for several months.

Derrick Lewis (@Thebeast_ufc) talked about taking his shorts off for a fan for $100 and says that Alistair Overeem turned down a fight with him three times in the last month. #UFCVegas6

Curtis “Razor” Blaydes has been making his case for a title shot as he is riding arguably the best win-streak of his career with stoppages of Shamil Abdurakhimov, former champion Junior dos Santos, and Alexander Volkov.  The run adds to what has been an impressive UFC career for Blaydes who has gone 9-2-1 in the promotion and defeated the likes of Alistair Overeem, Mark Hunt, and Aleksei Oleinik.

Former title challenger Derrick Lewis has grown into one of the most popular fighters in the UFC’s heavyweight division behind an affable personality and some of the most devastating knockouts of the past several years.  A veteran of the UFC since 2014, Lewis is currently on a three fight win-streak with wins over Oleinik, Ilir Latifi, and Blagoy Ivanov.  Following his victory over Oleinik earlier this month, Lewis had stated that he was looking to work on continuing to get his weight down in order to compete at a higher level. 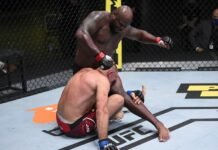 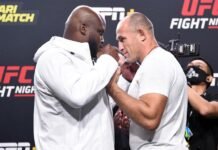