The former Invicta FC champ had a four-fight win streak snapped when she lost to Brianna Van Buren just over a year ago at UFC Sacramento. She found a different outcome against Ashley Yoder on Saturday, earning a unanimous decision victory — a result she says came thanks to a couple of key changes. Mainly, improved physical and mental health.

“I always need to fight healthy. Physically and mentally,” she told media outlets including Cageside Press post-fight. “In my last fight, I had a lot of things [impact] my performance. I injured my hand, I broke my right hand two weeks from the event. I insisted on staying on the card, to make my fight, and it was not the best decision.”

“Now I’m healthy, physically, mentally. I did my best. Ashley is a tough fighter, we all know, but I gave [my] all this fight,” Souza said.

Souza also credited her striking game as a contributing factor. “I’ve evolved my striking game step-by-step,” she stated. Souza was able to close the distance, she noted, although “Ashley is bigger than me.”

“I felt comfortable a little bit,” she added, noting the smaller octagon and some mid-fight adjustments. “I made adjustments in the fight with my kicks, with my movement.”

“This cage is smaller than usual, and I felt the difference,” she added.

Asked about what she wants next, Souza jokingly replied “Disneyland.” 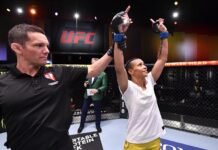