Randa Markos (who fought out her UFC deal recently and was not re-signed) is not the only fighter to have parted ways with the promotion of late.

In total, an additional five fighters have been shown the door, as the Ultimate Fighting Championship makes room for incoming talent. That after a record number of contracts, 39 in total, were handed out on this year’s edition of Dana White’s Contender Series.

Among the names released, Markos’s most recent opponent, Livia Renata Souza. A former Invicta FC strawweight champion, “Livinha” posted a 3-3 record inside the octagon, but lost three of her last four fights.

Ultimate Fighter 23 winner Andrew Sanchez might be the highest-profile release among this most recent round of cuts. The TUF 23 light heavyweight champ posted a 5-5 mark through ten fights with the promotion, most of which was spent at middleweight. Like Brazil’s Souza, he’d lost three of his last four bouts, including two straight.

Argentina’s Laureano Staropoli, who went 2-4 through his UFC run, was no surprise in terms of his release. After winning his first two bouts in the promotion, he’s lost four straight.

The final two fighters released over the past week or so, lightweights Khama Worthy and Teemu Packalen, were both on losing streaks. Packalen announced earlier this month that he was retiring from competition. 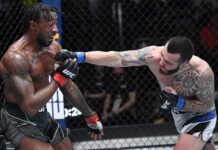