The UFC’s trilogy to crown the greatest heavyweight of all time would end with Stipe Miocic standing tall, defeating Daniel Cormier in an all-out war in the main event of UFC 252.

Bragging rights. The GOAT label. Oh, and that little thing is known as the UFC heavyweight title. Plenty was on the line in the main event of UFC 252. For Daniel Cormier, it was a chance to ride off into the sunset, gold around his waist. Stipe Miocic, not quite ready to retire yet, had the opportunity to confirm his status as the greatest heavyweight in UFC history.

All the face-offs done, articles written, picks made; all that mattered was the game of inches inside the cage between two of the best the UFC had to offer. And it was very much a back-and-forth battle, a close one, that unfolded Saturday.

It’s a scene that would play out in reverse at the end of the second, with even more of an impact. Miocic opened the second round with a hard kick to the groin, and Cormier took a brief moment to recover before they went right back at it. Miocic landed a hard combination as Cormier was retreating to the fence, and Cormier responded with a couple of hard shots in the clinch, similar to how Cormier finished Miocic in their first fight. Cormier started targeting the legs of the oncoming Miocic, and Miocic continued landing hard shots to the midsection. Cormier began faking the single-leg then coming over the top with the right hand, and it was landing a fair bit. Miocic landed a hard right hand as Cormier was along the fence that dropped him, and Stipe jumped on with the ground and pound. Cormier held on for dear life before being saved by the bell.

Miocic came out firing in the third round thinking Cormier was still hurt, and started landing numerous combinations. Cormier was doing his best to keep on firing, but he was throwing and landing way less than Miocic. The two briefly clinched, and they’d go back to trading at a distance as Cormier attempted to work his jab and low kicks. Miocic landed a combination and got the fight into the clinch, where he out-muscled Cormier. Miocic ended the round with a hard right hand followed by a hard shot from Cormier. The third round ended awkwardly as Cormier complained of an eye poke as he was retreating. Ref Marc Goddard could be overheard claiming it was a punch that did the damage, but replays showed otherwise.

Cormier started off fast with a couple of hard right hands early in round four before Miocic muscled him to the fence. Miocic landed a hard right hand that forced Cormier to retreat briefly, and Cormier responded with a hard right hand of his own before Miocic engaged in the clinch. Cormier tried to get a trip takedown but couldn’t, and Miocic looked to do some more clinching but Cormier forced his way out. Cormier ended the fourth round with a nice combination followed by some jabs to send the two to the final round of one of the greatest trilogies of all time.

Daniel Cormier attempted to come out swinging in the final round, but Miocic quickly got the fight to the fence and didn’t let Cormier have any space. While you never know with the judges, it felt at that point as if it were a one-round fight. Cormier separated and landed two hard right hands and Stipe landed a hard shot of his own before getting into the clinch and sitting against the fence once again. The two traded hard shots before Cormier stuffed a Miocic takedown in the final minute. Miocic once again got the fight to the clinch where the fight ended, securing his victory.

EVERY PUNCH ON THE EDGE OF OUR SEATS!

It’s not the decision D.C. wanted, clearly. And the eye poke, something that has plagued this trilogy, may make it a tougher pill for him to swallow. While Miocic was also poked early, the foul on Cormier clearly impacted his vision. Post-fight, he confirmed that he could not see, at all, out of one eye. Still it was a hell of a performance from both men. Cormier’s spot in the Hall of Fame is secure, and Miocic now has claim to the title of greatest UFC heavyweight in history. 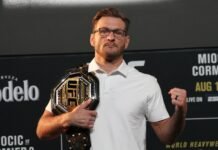