UFC 252 goes down this Saturday, August 15 at the Apex Arena in Las Vegas. The event is headlined by the rubber match between heavyweight champ Stipe Miocic and former double-champ Daniel Cormier, as the pair look to finally settle their trilogy. Also on the card is Sean O’Malley in the co-main event along with Junior dos Santos , John Dodson and others. In a late addition to the card, there are two fighters making their debut fighting each other in Tony Kelley and Kai Kamaka III, in a Featherweight bout.

How will Kelley fare in the UFC:

When you glance at Kelley’s record, it doesn’t look great. He’s coming off just a single win, has only one fight in the last four years, and only six pro fights. When you really dig into it though, his sole loss is to UFC fighter Kevin Aguilar, in a fight where Kelley arguably should have got the nod. Also, Kelley has beat Levi Mowles and Jordan Winski, who are both good prospects.

Kelley is very well-rounded being well-versed on the mat and on the feet. He will hold his hands low but is still very tough to hit because he gets his hands up quick and he has solid head movement. With that said, Kelley is good off his back foot countering very well. He uses a lot of feints/twitches to set up his head kicks and strikes from odd angles. He’s very diverse and technical, and he’s hard to read when it comes to what he’s going to throw at you. Kelley can wrestle as well, and has the ability to chain wrestle. When being taken down himself his grappling defense has looked very good. He’s always moving his hips and using butterfly hooks or single hooks to create a sweep or a scramble. The jiu-jitsu I really like from Kelley because he’s good defensively and he’s a threat offensively. Age isn’t on his side at 33-years-old but he’s not old in fight years. This is an underrated signing as I believe Kelley will fare quite well in the UFC.

How will Kamaka fare in the UFC:

Kamaka is a wrestler first who has all the intentions to just have a wrestle-heavy game plan. He doesn’t have that finishing instinct on the mat but has heavy top control. Usually, when he gets the takedown he’s content to just lay on top. He may have the boring label but it’s what he’s good at. Kamaka has shown glimpses of his ability on the feet, especially in his latest fight. He looked really good in that, landing kicks to the midsection. Also, Kai was ripping the body with his hands and going up top. He takes more damage than what he should however, reason being he sits in the pocket too long. This is a good signing especially being someone who’s still growing fairly quickly.

How do these two match up?:

This is a great fight that almost everyone is overlooking. Both athletes are super well-rounded. On the feet, I like the hands of Kai better because of the way he mixes it up going to the body and head. Still though the feints, setups, head movement, and footwork of Kelley makes him the better fighter on the feet overall. The wrestling between these two will be interesting as both offensively and defensively they are solid. Kelley is the bigger stronger guy so I would give him a slight edge there. This is a super good and close fight and I’m just slightly giving it to Kelley.

The bet I like is a straight bet on Kelley at +175 (BetOnline). This should be at pick-em lines where in no way Kelley should be this wide of an underdog. I won’t be surprised if Kamaka wins but no doubt the value is on Kelley’s side. 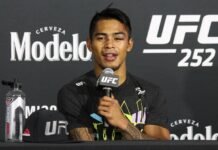