What has become something of a middleweight grudge match is back on. Brendan Allen and Ian Heinisch have once again been paired up, set for the UFC’s November 7 card.

Allen (15-3) has been perfect in the UFC through three fights since winning his way into the promotion on Dana White’s Contender Series. A former LFA champion, Allen has dispatched Kevin Holland, Tom Breese, and Kyle Daukaus in his three bouts inside the octagon thus far.

“All In” was particularly incensed, however, at Heinish pulling out of a previous match-up. And that’s before a fight planned for June 27 fell through. Something that Allen tackled ahead of his eventual fight with Daukaus.

For his part, Heinisch (14-3) is coming off a win over Gerald Meerschaert at UFC 250 back in June. That snapped a two-fight skid and improved Heinisch’s record inside the octagon to 3-2 overall.

The UFC’s November 7 card does not have an official location or designation announced currently. The promotion will finish out August on home turf in Las Vegas, with a plan to eventually return to “Fight Island” in Abu Dhabi.

Currently, the only other bout reported for the November 7 card is Sarah Moras vs. Vanessa Melo. 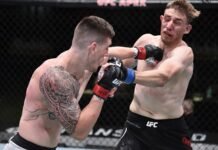 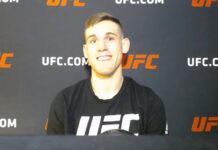