Cage Fury FC was in action on Thursday, for the second of two back-to-back cards. CFFC 83, the second of those offerings, had a main event to watch out for. That featured Ontario, Canada’s Jasmine Jasudavicius, an undefeated strawweight prospect, looking for her first big title. She’d be taking on Elise Reed atop the card.

Jasudavicius (4-0), training with Para Bellum MMA, entered the night undefeated, with three finishes through her four wins. Add an undefeated amateur career on top of that, and a successful foray into boxing, and Jasudavicius had all the hallmarks of a future UFC fighter.

In fact, she was confident enough in her UFC dream that she bet her best friend over it. What the friend put on the line was a tattoo. Of Jasudavicius’ face.

That ink may be one step closer to being reality come Thursday night. Reed, 1-0, also had a solid amateur career, dating back to just 2013. But Jasudavicius was certainly the favorite heading into the fight.

The action kicks off at 8:30 PM ET, airing live on UFC Fight Pass. Full results from CFFC 83: Jasudavicius vs. Reed can be found below. 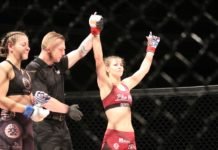 CFFC 83: If She Makes it to the UFC, Jasmine Jasudavicius’ Best Friend Must Get Tattoo of Her Face