Ahead of tonight’s Dana White’s Contender Series installment — week two of season four, or DWCS 28 overall in the U.S., for those counting — check out highlights from the official weigh-in and face off.

This week’s show features a number of fighters worth keeping an eye on. Among them, Vanessa Demopoulos, the stripper/fighter who has turned heads throughout her young carer thanks to some impressive skills on the ground. “Lil Monster” is ready to leave the adult entertainment world behind, however, as the LFA strawweight champion now has a shot at the big show: a UFC contract, with her eye on the rankings.

Demopoulous will be facing Cory McKenna, winner of two straight. The British fighter known as “The Hobbit” has finished three of her four wins to date.

Also of note, Canada’s TJ Laramie is getting his shot to break into the UFC on Tuesday. One half of the Laramie brothers (brother Tony is also a hot prospect), he squares off with Daniel Swain, who has over twice as many pro fights as Laramie — and it will be number 31 for him on Tuesday. “Agent Orange” has traversed the globe, fighting in Super Fight League, M-1, Pancrase, MFC and others in a career dating back a decade.

Full weights, video and photo highlights of Monday’s weigh-ins and face-off are below! 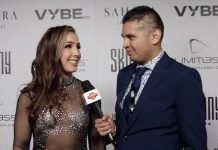 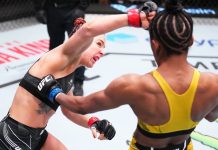 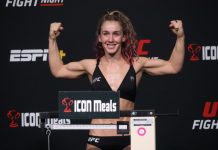