“I’ve been working with everyone undercover. I’m not going to say too many names, because during lockdown, we shouldn’t be training. But I’ve been doing my thing,” Darren Stewart said ahead of his return at UFC Vegas 6 this Saturday.

For Stewart, it’s not just a return to the cage but technically a return to the UFC. Not that he was ever cut. It’s just that, back in March, UFC London fell through at the 11th hour thanks to the coronavirus pandemic.

Stewart (11-5, 1NC) was supposed to fight on that card, against Marvin Vettori. Then, a mad scramble took place, with the UFC trying to move the entire event stateside. That fell through, and no UFC show would take place that weekend. But the promotion allowed for Stewart to compete on Cage Warriors 113, in a makeshift main event against another fighter from the lost London card, Bartosz Fabinski.

It was a wild situation by any measure, and didn’t exactly work out for ‘The Dentist,’ who lost a unanimous decision. “It was crazy, because I’m used to the UFC now. So going back to a [regional] show to fight on, then on top of that, fighting a day [earlier], change of opponent, corona-this, corona-that, it was madness.”

He’s not even sure how it all came together. But there was no hesitation about taking the fight, regardless of the change in date and opponent. “At the end of the day, I need the money. I don’t work.” With his family needing his support, Stewart took the fight. “Good job I did, because we had three months off not doing nothing. I can’t afford that.”

There was a lot of talk about European fighters struggling to make it to the U.S. earlier in the pandemic. And of course, Fight Island exists as a way to get those based outside America back into the octagon. But for Stewart, who hails from London, England, getting approval to fight stateside wasn’t the hard part. Getting to the U.S., however, was a little more complicated.

“I don’t know if it’s because of the whole corona situation, but we had to do connecting flights, and nine hours this, and watch where you step, and you can’t because of that person, and you’ve got to wear your mask at all times,” observed Stewart, adding “and I can’t breathe in these things even though I’m ‘The Dentist.’ It’s mad. It’s just all nonsense. But getting to the U.S., not a problem. I got the waiver signed that said I could fly, and that was it.”

At UFC Vegas 6, Stewart may have to dodge some coconut bombs in the form of Maki Pitolo. He’s not concerned about any threat Pitolo may pose, however.

“What does he bring to the table that makes him a dangerous opponent? Nothing really. I don’t really care. I don’t give a damn,” Stewart replied when asked about his opponent. “I’m going to go in there and do me. I’m not worried about what he does, what he brings to the table.” 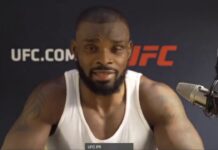