Brazilian outlet Combate reports that a high stakes bantamweight bout between Marlon Moraes and Cory Sandhagen is being targeted for October 10.

Brazilian outlet Combate reports that a bantamweight bout between top contenders Marlon Moraes and Cory Sandhagen is being targeted for October 10.  After crowning a new champion in Petr Yan in July, the bout carries major title implications as the promotion looks to name the next title challenger.

“Magic” Marlon Moraes has established himself as one of the top fighters in the UFC’s bantamweight division over the last few years.  After a stellar run in the World Series of Fighting, Moraes posted a 5-2 record in the Octagon that includes challenging for the title against Henry Cejudo and recording victories over contenders like Raphael Assuncao, Jimmie Rivera, and John Dodson.  Earlier this summer, Moraes had stated that the UFC was interested in a matchup between himself and former champion Cody Garbrandt but it is apparent that the promotion has elected to go in another direction for both men.

“The Sandman” Cory Sandhagen is looking to reestablish his place in the bantamweight following a loss to fellow top contender Aljamain Sterling in June.  The loss snapped a seven fight win-streak going back to his time in LFA and includes UFC victories over contenders like John Lineker and Raphael Assuncao.  As the fight with Sterling was called a title eliminator by UFC President Dana White, a win over an elite opponent in Moraes would get him right back in the mix if not secure him a shot at the title depending on how the division shakes out over the next few months. 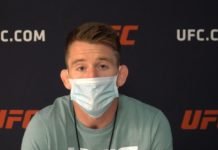