Ty Flores (7-2) will face Dustin Jacoby (11-5) in a light heavyweight bout at Dana White’s Contender Series on August 4. It’s the debut of the 2020 edition of the show, and the fourth season overall in the U.S.

Flores may have not fought in over a year but the Team Elevation standout has been keeping his skillset sharp even through an unprecedented pandemic. We caught up with Flores recently, and he explained what training has been like for him. “It’s been great, when quarantine started we had a real small group so we’ve been getting more attention from the coaches which is good. There were some days when we would even have more coaches than we would have guys sparring so it was good to get all the feedback.  It started with just a couple of us and we would have a pretty solid big guy group. It was all heavyweights and light heavyweights. We made a lot of improvements getting one on one from the coaches.”

Outside of MMA, Ty loves to hunt and explained to us what he has been doing outside of his MMA training. “I am a pretty big hunter so I have been getting ready for this season. I got Elk in September, I wanna try Bear as well, go back home and get some deer and of course I’m a big boar hunter as well. I’ve just been reading books on that, reading maps, practicing my tracking and going up the mountains and staying active with that. But when it gets closer to the fight I don’t really feel like camping it’s a lot of energy”.

The Team Elevation fighter is on a five-fight winning streak and is more then ready to put on a show at the UFC Apex. Flores feels very confident in his skillset and expects to be the better fighter wherever this match-up with Jacoby goes. “He is a kick boxer and I am more of a wrestler. I think the difference is he knows I want to take him down and I know he wants to knock me out. I know he’s not gonna take me down, that would be really dumb. But I’m also not scared to strike with either, I’ve fought tough strikers and I train with Alistair [Overeem], Curtis [Blaydes] and those guys hit so hard. I am not worried to strike with him either and we are gonna fight at my pace. I am going to dictate that, he is always going to have to be worried about the takedown.”

Flores continued, explaining why he believes a finish may be in order come fight night. “I am in such good shape right now that I think I could wrestle him for 5 straight rounds if I need to, and strike with him too. I am going to be closer to 230 on fight night and I think he walks around closer to 205 and I’m gonna put my weight on him. I have some brutal ground and pound. The last guy I fought I broke his jaw after two or three hits. I think I’m gonna get him on the ground and he is gonna feel that, and I’m gonna zap all his energy.”

Be sure to tune in to watch Ty Flores make his Contender Series debut on August 4, live on ESPN+. 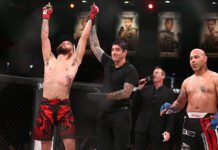