After nearly a month on Fight Island, the UFC is back in the Apex residing in Las Vegas, Nevada. UFC Vegas 5 is headlined by Edmen Shahbazyan, who is looking to continue building his resume against middleweight staple Derek Brunson. One of three UFC debuts on this card is Russia’s Timur Valiev. He will be taking on sophmore UFC fighter Jamall Emmers (17-5 MMA, 0-1 UFC).

How will Valiev fare in the UFC:

It’s nice to see Valiev finally in the UFC because he’s deserved an opportunity for years. Valiev is super well-rounded being comfortable no matter where the fight is at. On the feet, he’s constantly going forward and throwing at a high pace. You’ll see that Valiev likes to go for style point using spinning attacks frequently and flying knees. Never one to waste motion, Valiev uses a lot of feints and is nearly right on the money when he lets loose. The Russian is always throwing in bunches, mixing in kicks and punches ripping combinations to the head and body. As well, Valiev is good at attacking the legs really throwing with his hips.

Of course, the Dagestanian is a superb wrestler. His timing and more so his quickness makes it easy to have success with double legs. He can also just muscle opponents down in the clinch or while on the back. Hardly ever stationary, Valiev is always working to improve his grappling position. In guard or even half-guard, Valiev will posture up landing punches. Valiev is good at tying up the wrist of his foes to let off with some damaging ground and pound. Very glue-like with his grappling, Valiev gives no space on the mat. He’s well-conditioned going to the scorecards nine times. Valiev fights at a high pace and carries that same energy through three rounds. An excellent signing for the UFC and he is someone I think can break into the top 15 at some point.

How he matches up with Emmers:

Emmers is a very technical striker that always throws one-two’s as the power isn’t there but the combinations and aggressiveness shine. Emmers’ wrestling is solid, his shots are perfectly-timed and solid execution is done very well. Valiev is a natural bantamweight taking on Emmers who has a four-inch height advantage and a six-inch reach advantage. Valiev with his aggression has a substantial chance to nullify the reach of Emmers. I just would be set to believe that the cardio, wrestling, and pressure will eventually break Emmers. What a fight though and definitely not a walk in the park for Valiev. 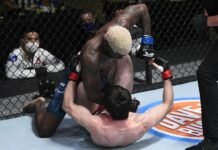 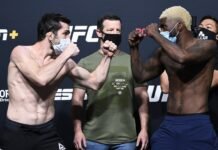 Welcome to the UFC: Trevin Jones