Canada’s Gillian Robertson will be looking for her second win of 2020 when see meets Brazilian flyweight Poliana Botelho this October.

Following a report by Combate, Cageside Press had confirmed with a source close to the situation that the pair will face off on October 17, at a previously unannounced UFC event. The card does not yet have a location/venue attached to it.

Robertson (8-4) is tied with 125lb champ Valentina Shevchenko and top contender Katlyn Chookagian as the winningest fighter in the flyweight division. She also has the most stoppage wins, and submissions, in the weight class. In her most recent bout, she submitted Cortney Casey — a late third-round finish in a fight that Robertson pretty much controlled bell to bell.

Overall, the submission ace from Niagara Falls, Ontario is 5-2 inside the octagon since entering the promotion in 2017.

Opposite Robertson in the octagon this October will be Botelho (8-2), who has won three of her four UFC bouts to date. She’s been out for a while, however, last competing at UFC 236 in April 2019, where she earned a unanimous decision win over Lauren Mueller.

No other fights have yet been reported for the UFC’s October 17 event. The promotion returns to Las Vegas this week, and is expected to spend at least part of September on “Fight Island” (Yas Island, Abu Dhabi). 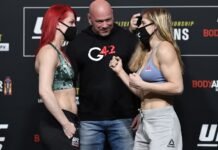