Tanner Boser continued his rise to stardom at UFC Fight Island 3 with a second-round knockout against Raphael Pessoa.

It’s been a great month for Tanner Boser. On June 27, he knocked out former PFL champion Philipe Lins in the first round. Then, at UFC Fight Island 3 last Saturday, he knocked out Raphael Pessoa.

In the second round, Boser hit Pessoa with a looping left hand that caused him to stagger, then turtle up along the fence. A few more blows and the fight was stopped. Boser described the finishing sequence.

“Well, I actually did feel my knuckle dig into his eye,” Boser said. “Yes, he quit. But I don’t know how much damage there is. Maybe his eyeball has damaged, maybe his orbital broke? I don’t know. He absolutely quit, but we don’t know the extent of the damage.”

What’s even more impressive, is that due to mandatory quarantine periods, Boser essentially was not able to train for this fight. It will also take away his ability to fight again until he gets a true training camp under his belt.

“I had two weeks of quarantine [after the June 27 fight] where I was seriously an absolute mess eating and drinking all the time because I was stuck in my apartment,” Boser said. “So two weeks and then I had to come here and fight. So three weeks [without training] and now it will have been four or five weeks where I haven’t actually trained at all. I have to go home and quarantine another two weeks, which is going to push this to seven weeks. Then I have to get back to the gym. I have to get back to the gym and train hard for like at least a month before I consider taking a fight.”

With that in mind, he wasn’t going to miss out on the opportunity to make it two wins in a month.

“Sometimes, man, you just gotta roll the dice,” Boser said. “Just have to go in and flip the coin. I did it smart. I didn’t come in and all I did was flip coins the entire time. I didn’t just go exchange with him. I had to fight him smart. But sometimes you got to risk it and the reward, the payoff, will be worth it. In this case, it is literally because I got paid.”

Lastly, a storyline leading up to the fight was the mystery of Tanner Boser’s fight shorts. It turns out that they were never found and the UFC provided a new pair of shorts on fight night.

“They are probably forever lost,” Boser said. “The hotel brought me a case of beer to my door at my hotel and said, Sorry, sir, for losing your shorts, we brought you a gift. So I now have four beers at my hotel room that I’m going to go and crush and you know what? I would trade my shorts for those beers every day of the week. So thank you to the hotel staff here on Yas Island.”

For these summer months, everything’s coming up Boser. It may be a little while until we see him fight again, but he’ll have a growing coalition of fans waiting for that return after scoring two knockouts in a month. 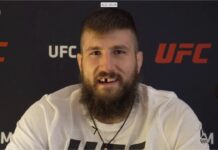