Eventual Bellator 242 opponent Rudy Schaffroth had been expected to face Hard Knocks 365 heavyweight Steve Mowry. But Mowry was forced out of the event due to a positive COVID-19 test. That left Schaffroth without an opponent, with just days to go.

Hylton (6-4) got the call. “I’ve been looking to go to Bellator ever since I started my amateur career,” he told media outlets including Cageside Press following the event Friday. “I heard [the call], I immediately called my wife and said ‘I’m sorry honey, but I’m going to say yes.'”

He won. She has to forgive him, right? Over the course of the day, Hylton got his affairs in order, so to speak, and made it to Uncasville, Connecticut — and most importantly, through the COVID-19 testing process.

While some fighters have missed fans in the building during the coronavirus pandemic, Hylton found there was an advantage to their absence in his debut. “Honestly I think it was a good thing that there was no crowd. It didn’t really let me know how big it was immediately,” he explained. Less to be nervous about, perhaps. “But as soon as they said I won, I dropped to my knees, and I knew who I beat. It’s a decision, so I can’t really call it a full victory. But I did okay.”

That he did. To this point, Schaffroth had only lost to another big prospect, Tyrell Fortune. But despite the short notice, it was Hylton who looked to be the fresher, more active fighter as the bout wore on.

It’s a credit to First Class MMA in Brunswick, Maine, where Hylton spends most of his time. “We don’t mess around. We’ve got good coaches,” he noted. “We’ve been trying to do this a long time. I’m glad I got here. I can’t tell you how grateful I am to everybody who helped me do it. I know it’s me alone in that cage, but there’s a lot of people who made it happen.”

Hylton was clearly emotional following his promotional debut. But he was also critical of having let it go to the judges. “I’m going to have to do more next time,” he said. “I’ve been hunting down a title for a while now, I lost my first two attempts. Hopefully Bellator’s going to want me back again. I know they’ve got a badass champ, ‘Darth’ Bader. I know I’m not ready yet, but I will be.” 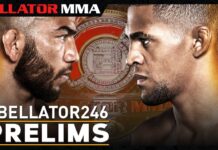 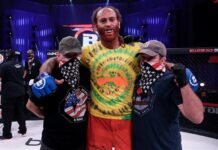 Bellator 246: A Difficult Path Has Led Ras Hylton to His Dream