How do you endear yourself to MMA fans everywhere? Fight often, fight anyone, and rock a mullet. Canada’s Tanner Boser, returning to action almost a month to the day of his last fight, a win over Philipe Lins, was doing just that. Originally scheduled to face Justin Tafa, he found himself paired up against Brazil’s Raphael Pessoa in a preliminary card heavyweight bout at UFC Fight Island 3.

Coincidentally enough, both men had a single loss in the UFC: to Ciryl Gane.

The first round started with both men giving a lot of respect to one another, and it didn’t change much throughout the round. Boser threw out quite a few feints, which Pessoa bit on and moved backwards on almost all of them. Pessoa tried to get the offense going with a big spinning heel kick to the head, but was high with the effort. Boser eventually began to find success with the leg kicks, but apart from that the round was mostly just used to feel one another out.

The second round was more of the same, but the leg kicks began to wear on Pessoa. After an attempt or two of trying to get Boser to the mat, Pessoa began to encourage Boser to engage him with his own back against the cage. After a few fruitful exchanges for each fighter, Boser landed a shot to the right eye of Pessoa, which appeared to have damaged the Brazilian. He fell to his side and Boser finished with more than a few follow up shots.

If Boser continues to put in performances like that, the Gane loss will soon be a distant memory. 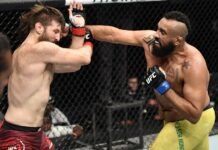