Featherweight action on the preliminary card of UFC Fight Island 3 on Saturday night saw Mike Grundy taking on Movsar Evloev. Grundy entered the night on a nine-fight win streak, capped off by a victory in his UFC debut last year. However, that was in March of 2019, a TKO of Nad Narimani. After injury scrapped a fight with Evloev last August, and the cornavirus halted a planned fight with Makwan Amirkhani, it’d be well over a year between fights for the Brit.

Entering his third UFC bout, Evloev was a perfect 12-0 in his career. He continued that streak Saturday, but not before a scare.

At first the two seemed content to test out the waters on the feet, but Grundy quickly changed that. After catching a body kick, he took half guard. Although he landed some decent ground and pound, the real threat came when he changed the attack to a d’arce that looked like it might be the end of the fight. Evloev then used an explosive reversal and got it back to the feet. Evloev then scored a big shot on Grundy that appeared to wobble Grundy a bit and opened up a cut under his left eye. Grundy ended the round with one more takedown for good measure.

The effects of being stunned in the first round was soon apparent for Grundy, who began to look for more desperate takedowns from further away. Evloev continued to pick away with jabs and straight punches. Grundy did manage to get Evloev back to the mat on three occasions. However, the time on top was minimal and the story of the second round was the striking of Evloev.

The grappler vs striker dynamic became even more clear in round number three. Evloev continued to get the better of Grundy with the strikes, while Grundy looked to wrestle. Striking was the name of the game early, but Grundy was able to score a takedown about halfway through the round moving immediately to the back. Like most of the second round, it was incredibly short lived. A similar takedown to half guard against the cage yielded similar results. The round ended with Evloev working his jab and picking away at Grundy. 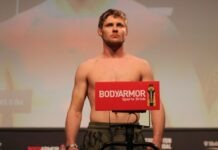