Lazzez (9-1) fights out of Dubai, and the Tunisian-born welterweight will make history as the first Arab-based fighter to fight for the world’s largest MMA promotion. He’ll do so in in Abu Dhabi, essentially fighting at home when he takes on Abdul Razak Alhassan. Of course, there’s one downside: no crowd there cheering him on.

“The Sniper” however is taking it all in stride, he told Cageside Press during the UFC Fight Island 1 virtual media day.

“In the life we have to adjust. We have to adapt in some situations. It’s not always a perfect moment or perfect scenario,” he observed. “I usually always love to fight in front of my own people, and I get the energy from the crowd. But it’s something new [the pandemic] for everyone— for me, for all the UFC athletes. So we are adapting and gotta keep fighting and entertain people.”

Entertaining is what observers are expecting Lazzez vs. Alhassan to be. Both fighters have plenty of finishes populating their records. Alhassan has finished his last three, albeit he’s been out of action since 2018 due to sexual assault charges (he was found not guilty earlier this year). Lazzez has eight finishes across his nine pro wins.

But rather than a firefight, Lazzez is expecting “a very nice fight. A calm, composed war.” Albeit, he admitted, “don’t get me wrong. Anyone here can get clipped.” And if they are, someone will have the opportunity to finish the fight.

Heading into his biggest fight to date, Lazzez is surprisingly not feeling any jitters.

“Not actually,” Lazzez replied when asked whether any nervousness had set in. “It’s super weird because, this is your UFC debut, but it’s so weird, I feel like super calm and composed. Usually, they lie, all the fighters that tell you ‘I’m super pumped and excited.'” Lazzez admitted that there is generally fear inside, that fighters don’t necessarily talk about.

But in this case, “I was enjoying the process, just being happy here in my second home.” He’ll no doubt be enjoying it even more should he get his hand raised Wednesday. 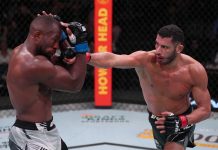