Make no mistake about it, taking a title fight halfway around the world on barely a week’s notice is what the kids might call a “gangsta” move. And when it comes to that life, Jorge Masvidal is at the forefront of the UFC.

“Gamebred” has never been one to back down from a fight. That goes right back to his backyard fighting days, something of MMA legend at this point.

But he’s taking that to the next level in accepting the main event at UFC 251. A welterweight title fight against Kamaru Usman, with more than just the title on the line.

Jorge Masivdal, after all, has fought hard to get where he’s at. He turned down the UFC’s offer of a title fight against Usman earlier this year. The money, he said, wasn’t right. A well-documented contract dispute followed. The UFC elected to give the shot to Gilbert Burns instead.

Then came word that Burns had tested positive for COVID-19. Masvidal was back in the mix. And now, with a new contract in hand, he’s in Abu Dhabi, on Fight Island. Visibly yawning at media day.

That’s more about the travel than any lack of excitement. To be clear, Masvidal is excited for the experience. “I love popping cherries, so it’s pretty cool in that sense, you know?” he told media outlets including Cageside Press at the final media day event for UFC 251. Masvidal, however, was clear that he’s not getting caught up in the moment. “I keep reminding myself that no matter how cool this is, and how many cool things I’ll do along the journey, it’s just a fight. And I’ve got to keep reminding myself, ‘it’s just a fight.’ So right now my emotions are— I don’t let myself get overwhelmed by everything and stuff, I’m just here to fight.”

But he almost wasn’t. That’s the rub. Masvidal passed, not willing to fight for less than he felt he was worth. Gilbert Burns got the nod — but fate, or circumstance, had other plans. That, and the UFC gave him a better deal.

That does not mean Masvidal will suddenly go dark on the subject of compensation. Asked if he’d still lead the charge for fighter pay after all is said and done, “Gamebred” replied that “I’m still leading the charge. I think I just set an example to lead the charge. They offered me a deal, I didn’t like it, I didn’t take it.”

“They came back with a much better deal. That’s why I’m here. If not, believe me, this is not nowhere near the same deal they offered me before. If not I wouldn’t be here,” he continued.

Of course, six days notice — what his boils down to for Jorge Masvidal — isn’t really any time to prepare for a fight. Not with travel time mixed in.

“Six days notice, how prepared could I be?” he questioned one reporter when asked about his preparation. “I’m as prepared as I need to be for [Kamaru] Usman, but obviously, it’s not like a full training camp. If I had six weeks to prepare, that’d be different. My weight wouldn’t have been as high. I’m not going to say weight-wise, I’m 100%. But everything else — my mind is ready, my heart is ready, my skill-set is better than him any day of the week. I just need to go out and prove it on Saturday.”

Part of what has his confidence up is a perceived mental vulnerability in the champion. “There’s other guys that I would have said ‘ahh maybe I need more than six days.’ A lot of guys that I fought in the past, that I wouldn’t have fought on six days,” admitted Masvidal. “This guy’s like the perfect guy to take it on six days.”

Asked why, Masvidal quipped “Besides him having 17 different personalities and me not knowing which one’s going to show up to fight? I think he’s weak-minded.”

And while Jorge never specified what exactly he sees as weak in his opponent’s mindset, he expects it to manifest come fight night. “His mental weakness is going to come out in abundance on Saturday. The world’s going to see it.” And Masvidal will take full advantage of it, he promised. 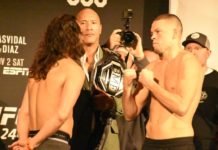