Jimmie “El Terror” Rivera (22-4) will face Cody Stamann (19-2-1) in Abu Dhabi (Fight Island) July 15. Although both men are ranked bantamweights, this highly anticipated contest will take place at featherweight due to this contest being made on short notice.

We caught up with Rivera, the Tiger Schulmann’s standout fighter and coach as he prepares to snap the only two fight losing streak of his career. When Frankie Edgar‘s opponent fell off, Jimmie wanted to jump at the chance to fight the longtime UFC legend. However that fight did not come to fruition and instead a match-up with Stamann is now scheduled. Rivera explained how this match-up came about. “They called for Stamann, and then I found out about Frankie and said I’ll take that fight. And as far as I know he chose not to fight me and found someone else to fight. So I asked if Cody was still on the table so I said I’ll take that fight.”

In a previous interview with colleague and Cageside Press contributor James Lynch, Rivera announced that both himself and his wife were infected with the COVID-19 virus earlier this year. We asked if he could explain what his symptoms were and how bad he felt. “I had a backache for three days, I had a fever the first day and then the second day it was on and off, and then the third day it was nothing. I was really fatigued the first day, the only thing that was crazy, I did lose a sense of smell even though I can’t smell that well anyways because my nose is all jacked up. My wife had it a little more serious than I did but she is better now.”

Rivera is in Las Vegas now and through the first COVID-19 testing step for the UFC. He will make the 16-hour flight out to Abu Dhabi tomorrow with his team and go through the rest of the process to get cleared. Rivera told us he will have to get tested at least two times more once he arrives on fight island.

As for the fight, Jimmie Rivera knows that Stamann will not be an easy out. Cody has a stellar record and a similar skillset to the decorated wrestler. However, Jimmie still feels very confident leading up to this scrap. We asked him where he feels he will have the biggest advantages in this fight. “I’m not trying to be cocky but just everywhere. I think he is like me but I have more experience on him because I’ve been doing it a lot longer. I’m not a wrestler turned striker, I’ve been striking my whole life. I’ve been wrestling since middle school and I’ve just been doing it a lot longer.”

Check out our full interview with Jimmie Rivera below! 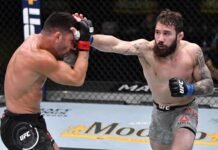