UFC 251 marks the promotion’s debut on Fight Island, and the first of four events designed to get its international roster in the mix during the ongoing pandemic.

Jorge Masvidal is a fighter that has been around the way a few times. Jorge began his fighting journey in the backyards of Flordia, fighting on an underground circuit, before moving on to compete in Bellator and Strikeforce then finally making his way to the UFC in 2013.

Masvidal had a very successful 7-fight stint in the UFC’s lightweight division, with wins over solid competition like Tim Means, Michael Chiesa, and James Krause. Masvidal took his first welterweight fight in the UFC in July of 2015, just three months after losing a split decision to Al Iaquinta in what would be his last fight at 155lbs. Jorge’s split decision loss to Iaquinta was one of the most controversial decisions of 2015 and undoubtedly left him looking to make a change. Jorge was 30 years old at this time and with a 5’11” frame and a 73″ reach, making the move to welterweight seemed like just the change that was needed.

Jorge has been at welterweight ever since. His bout on July 11 will be his 13th fight at welterweight. Even though Jorge technically has a worse record in the UFC at 170lbs, than at 155lbs, all of his losses were by split decision save for one unanimous decision. Gamebred’s move 170lbs. birthed a lot of exciting finishes, belt opportunities, and a contract restructuring so it’s safe to say that he made the right choice back in 2015. 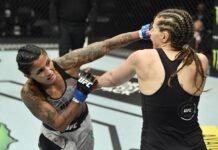