With the Fourth of July just days away, we examine the evolution of the holiday as it has become the biggest annual weekend in the sport and look back at the best events to ever be held on the date.

In sports, the ability to dominate an entire date on the calendar is the ultimate accomplishment.  Look no further than the NFL which has branded an entire of the day of the week with Sunday Night Football leading up to the Super Bowl every February.  It is a tried and true concept that associations around the world look to replicate, whether it be the NBA and their All-Star Game near Valentine’s Day, Wimbledon and their fortnight of play in late July, or countless others.

The idea of a MMA reaching such a point ten years ago was a lofty goal.  After all, this is a sport that less than 20 years ago was on life-support and a decade ago was still graduating from a niche spectacle to a recognized athletic competition.  The idea of the UFC being the most watched program on television on any given night over another established brand would have been an accomplishment in-and-of itself.

That has all changed.  Live MMA can be found on several different television networks and streaming services.  The days of cringeworthy sponsors have been replaced by bigger and larger brands now attaching themselves to the worldwide leader in the sport.  Now in an unprecedented time amidst a global pandemic, the UFC has become the only major sport currently operating in the United States as other associations have been at a standstill for several months.

For more than a decade, Fourth of July weekend has become the date for the UFC’s biggest show every year.  Once only headlined by a major event, the week has seen everything from an entire fan convention to up to three events in as many nights.  Today, the event is recognized as “International Fight Week” with ceremonies such as the World MMA Awards and the UFC Hall of Fame both taking place leading up to a stacked card featuring some of the best fighters and match-ups possible.

We looked back at the date once before, but the years since have led to a revised list as we rank a new top six in the history of events held on Fourth of July weekend (of course, this year’s big show runs on July 11, thanks to the ongoing pandemic).

Could you have asked for two more physically intimidating specimens back in 2010?  At a perfect 12-0 with all first round knockouts, Shane Carwin was the Francis Ngannou of the time before Instagram.  And who better for him to face than Brock Lesnar, the WWE champion turned mixed martial artist whose physical stature allowed him to bulldoze established veterans en route to being dubbed the Scariest Man on the Planet.

By today’s standards, it is still difficult to promote a better fight.  The brash Lesnar against the soft-spoken Carwin gave a clash of personalities.  Physically, there was no other man who matched the brute force of the other. Lesnar’s star-power from the WWE made the card a guaranteed knockout on pay-per-view.  Finally, the fact that Lesnar was returning after a year away due to diverticulitis added a level of intrigue.  From a marketing stand-point, it was impossible to get it wrong.

For the seven minutes that it lasted, the fight was among the most dramatic in heavyweight title history.  Lesnar found himself on the canvas early and took an absolute bludgeoning from Carwin for the first five minutes.  Unable to finish Lesnar, a visibly exhausted Carwin was taken down in the second round and soon found himself in an arm-triangle that there was no escape from.  It was a historic comeback, capped off by the iconic photo of Lesnar celebrating on top of the cage in a mask of his own blood.

As one of the earliest entries on the list, it also hosted a pair of interesting match-ups.  Original Ultimate Fighter contestant Chris Leben pulled off an epic comeback of his own to submit Japanese MMA star Yoshihiro Akiyama in a fight that he had been losing up to that point. Leben had taken the fight just two weeks after his previous bout.  The night also hosted the third UFC fight of future media mogul Brendan Schaub who at the time was in the midst of a four fight win-streak and whose idea for The Food Truck Diaries had not been born yet. 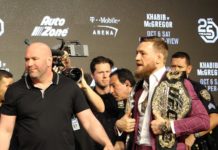 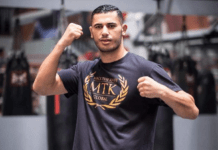 Miranda Adkins, And The History Of One of the Most Dangerous Promoters in Combat...