UFC 250 was a night of superb individual performances. The tone was set early, when Herbert Burns picked up a quick submission of the returning Evan Dunham. And that trend continued throughout the night. That wasn’t enough for a bonus, however.

Alex Perez made a statement early on the card, chopping down Jussier Formiga with leg kicks. It was the second straight UFC event to feature a leg kick TKO — a sign of just how important low kicks have become in the sport. The win also puts Perez in contention for the title in the barren flyweight division, which is awaiting a rematch between Joseph Benavidez and Deiveson Figueiredo for the vacant title.

Sean O’Malley opened the main card with the biggest test of his career. That came against former WEC bantamweight champ Eddie Wineland, and “The Sugar Show” passed with flying colors. O’Malley scored a walk-off knockout in the opening frame.

Aljamain Sterling, another bantamweight, picked up a quick submission of Cory Sandhagen later on the card. Their fight had been considered a title eliminator by many. So welcome to contention, Aljo. The rear-naked choke forced Sterling to tap, though he appeared to go out just after.

Finally, in the co-main event, Cody Garbrandt proved he still had it. Years without a win, and a three-fight losing streak are now behind him. Garbrandt, the former bantamweight champ, scored a walk-off KO of his own. A buzzer beat at 4:59 of the second round, putting the dangerous Raphael Assuncao to sleep.

Three bantamweights, and a flyweight. All with Performance of the Night awards (no Fight of the Night was handed out). UFC 250 really was a showcase for the UFC’s smallest weight classes. 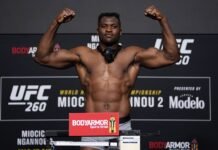 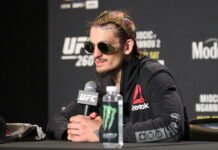 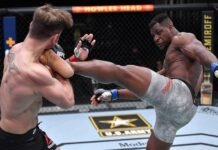