Aljamain Sterling put on an impressive performance in what many believe was a bantamweight title eliminator at UFC 250. Early in the first round, he took the back of Cory Sandhagen, securing a rear-naked choke and ending the fight.

It was a statement victory in a fight many saw as the card’s true co-main event. Sandhagen had been on a tremendous run. Sterling has been on one of his own.

Now, Sterling must wait for the title picture to clear up. But he’s willing to stay ready, in case one of Jose Aldo and Petr Yan don’t make it to the dance.

“Of course. Definitely,” he said, when asked if he’d be willing to step in, should the call come. Sterling’s teammates are getting ready for upcoming fights of their own. Merab Dvalishvili fights Ray Borg next weekend. Matt Frevola competes the following week.

“I’m going to be here working out with these guys, helping these guys stay in shape,” Sterling said. “Getting them ready, giving them some looks. I’m not banged up, which is great. So I could be a good asset to them, these next few fight weeks.”

While he’s willing to fill in for a title shot, one thing that Sterling is not willing to do is take another fight before his shot at gold. “I’m going to have to say no,” Sterling said, when asked in a virtual post-fight scrum if any other fight would make sense. “If Dana said ‘this one’s the one with title implications on it,’ I’m going to have to say no, and sit out and wait,” he continued. “I think I put the time in, I think I earned it, I think I did it in spectacular fashion against I guy that people were thinking was going to make it really, really difficult for me. And I thought it was going to be difficult too. And I came out, and I think I passed the test with flying colors.” 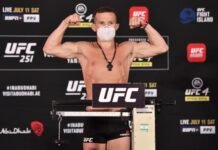