Roxanne Modafferi (24-16) is coming off one of the biggest wins of her career in January, when she beat Maycee Barber via Unanimous Decision and claimed the number 5 ranking in the UFC women’s flyweight division.

Now, “The Happy Warrior” is set to return against Lauren Murphy later this month, on June 20. The show will presumably be held at the UFC Apex in Las Vegas.

With the coronavirus pandemic effecting all of us in an adverse way, we recently asked Roxy how she has been getting her training in to prepare for this fight. “It’s been crazy. I feel like I have two parts to my camp, the first part of my fight camp was in my Muay Thai coach’s garage,” she told us. “I went to AJ’s garage cause the gyms were closed, and I have to keep training so every day I was hitting mitts with him. And doing strength and conditioning in Lorenzo’s back yard, so I’ve been training really hard and now I am working more with JoJo [Joanne Calderwood] and some of the girls so its been kinda crazy.”

Modafferi’s last win may have been her most impressive performance to date. However, her detractors, and Barber herself, put an asterisk beside the win due to the fact that Maycee was hurt early on in the fight. Modafferi isn’t bothered by what the detractors have to say however. “The best part about that was that nobody agreed with her,” said Modafferi. “All of the fans were like, ‘ya, no, you lost.’ When people were talking about it, I was reading social media and everyone was like ‘Roxy was beating her anyways,’ so it was cool everyone was on my side so it didn’t really matter what she said it just kind of made her look bad.”

With the UFC still unable to hold events with fans in the stands you can imagine it might present an issue for some fighters. However, Roxanne Modafferi is used to fighting without fans present, thanks to two stints on The Ultimate Fighter. “When I fought on The Ultimate Fighter it was eerily quiet, you could hear a pin drop. But you know they are watching, you know that thousands of people are watching you [at home] but I got over it. I fought multiple times on TUF, I could hear my coach really well, but I can always hear him anyway, so it’s fine, it will be great.”

The match-up on June 20 sees “The Happy Warrior” facing a tough Lauren Murphy. This fight with Murphy will pit Modafferi against the #6 ranked fighter in the division, so a win is crucial as both ladies climb towards a title shot. “I am super excited for this match-up, I think that the things I am good at are going to let me win this fight,” Roxy predicted. “I don’t think I need to learn any new skills to defeat her, although I do have a new super power attack, a finishing move. But it’s too powerful for my body to handle so I have to be careful how much I practice it and how much I throw it.”

This is a match-up of two very well rounded mixed martial artists and Roxy knows it will not be an easy fight. “I really want a knockout in my career and I’m not so sure she is the right one to give me that, cause she has a hard head. She is really sturdy. So I don’t know, I am gonna try, we will see. Whatever way I can win, I will try to win.”

The high stakes flyweight showdown will air June 20 on ESPN, with Roxanne Modafferi (24-16) vs. Lauren Murphy (12-4) representing an important bout for the 125lb division. 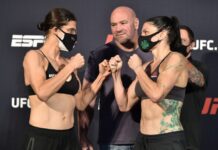 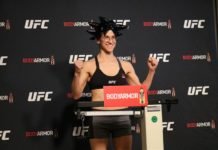 UFC on ESPN 12: Gian Villante Feels Maurice Greene May Have Advantage in One...