If you’d asked Roosevelt Roberts back in April, when his fight with Matt Frevola was scrapped, if he’d be fighting this week, you might not have received the most confident of answers.

Roberts, who goes up against Brok Weaver this weekend at UFC Vegas, knew he’d be fighting eventually, mind you. He just needed to put some faith in UFC President Dana White.

The switch in opponents from Frevola to Weaver may have worked in Roosevelt Roberts’ favor, he suggested. There wasn’t much of an adjustment from one foe to the other, said Roberts. “I mean, I guess I was getting ready for a wrestler,” he explained. “But you know, I strike originally, so I didn’t really have to change anything up. Just got to go in there. I don’t think I have to worry about some of the takedowns, so that actually plays out a little better.”

Roberts, like Weaver, came up through the Contender Series. Those who have fought on the show have seemed more accustomed to the empty arena setting. Roberts, for one, doesn’t seem bothered by it.

“I think no matter if there’s a large crowd, small crowd, I’d be able to go in there,” he said of his prior experience giving him an edge. “So I’m looking forward to going in and doing my thing. The Contender Series, I think I got used to not fighting with people. So it’s gonna be good. Looking forward to it.” 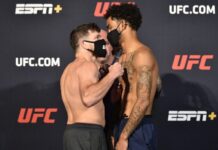 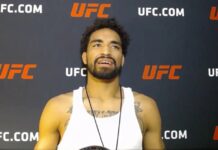 Finishing the Fight: UFC on ESPN 11