Different fighters have found different solutions for training during a pandemic. Some have managed to keep things as close to “business as usual” as possible. Others have returned to the “good ol’ days” of garage and basement gyms. Ahead of UFC Vegas, where Antonina Shevchenko goes up against Katlyn Chookagian in an intriguing flyweight fight, “El Pantera” told Cageside Press that her solution was to train outdoors.

Speaking at the virtual media day ahead of the event, Shevchenko (8-1), a decorated kickboxer and sister of UFC women’s flyweight champ Valentina Shevchenko revealed what her camp, in the midst of the coronavirus pandemic, looked like. And it was far from normal, if not exactly unappealing.

“First of all, this training camp was very long for this fight, because initially I had the fight scheduled for April 25, with a different opponent, Cynthia Calvillo,” she explained. “But about like three weeks [out], she said she cannot fight on this date. So Katlyn took the fight.”

With the opponent switch factored in, Shevchenko has been training for the bout since January. “It was like five months of training camp. And initially we went to Arizona, to Phoenix to train in Fight Ready gym, where Henry Cejudo trains. Before all gyms were closed, we trained there. But when everything was closed, we just had to find places to train outdoors. So now I know many places to train outdoors in Phoenix, Arizona and here in Las Vegas, because basically, all my trainings are outdoors, in parks, in mountains.”

Sounds like something out of a Rocky movie. But then, so does her current opponent being the last woman to face her sister, Valentina. Chookagian and Valentina Shevchenko faced off earlier this year, with the title on the line at UFC 247. Valentina won the bout via TKO in the third round.

Both Antonina Shevchenko and Katlyn Chookagian have downplayed the familial connection, however. Chookagian doesn’t appear to be out for revenge, while Antonina brushed off the idea of taking advice from her sister, despite the pair having recently fought. 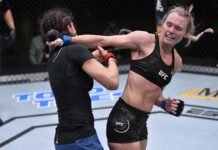