MMA Pioneer and former heavyweight champion Kevin Randleman will be inducted into the UFC Hall of Fame.

During the UFC Florida broadcast Saturday night, the UFC announced the news that “The Monster” Kevin Randleman will be inducted into the UFC’s Hall of Fame as part of the Class of 2020. Randleman will be going into the Pioneer Wing of the promotion’s Hall of Fame, the same wing as his former best friend and teammate Mark Coleman. Randleman was an MMA legend, with incredible wins across his career over names like Pedro Rizzo, Pete Williams, Mirko Cro Cop, and more.

Randleman’s standout win of his career was arguably his victory over the aforementioned Mirko Cro Cop. The Croatian fighter was on an incredible run and was being talked of as one of the greatest heavyweight fighters on the planet. In the opening round of the 2004 PRIDE Heavyweight Grand-Prix, Randleman and Cro Cop were matched up. Despite being a massive underdog, Randleman would go onto knock out Cro Cop in the first round, in one of the greatest MMA upsets of all-time.

However before Randleman found success in PRIDE, he was a heavyweight champion in the UFC. Coming into the promotion under the wing of Mark Coleman, Randleman quickly shot up the ranks and secured a shot at the champion Bas Rutten at UFC 20. Randleman would lose a controversial decision but would redeem himself after winning the vacant UFC heavyweight title in a win over Pete Williams. Randleman would defend the title against Pedro Rizzo in his next fight, before losing the belt his next time out to Randy Couture at UFC 28.

Randleman, unfortunately, passed away in 2016 at the age of 44. However, despite being gone, his MMA legacy remains untouched and will be forever enshrined as a member of the UFC Hall of Fame.

In a press release distributed to media outlets following Saturday’s announcement, UFC President Dana White called Randleman one of the first real athletes of the promotion’s early days. “He was a two-time NCAA Division I National Champion and All-American wrestler at The Ohio State University. He was the fifth heavyweight champion in UFC history and one of the first athletes to successfully compete at both heavyweight and light heavyweight. He was a pioneer of the sport and it’s an honor to induct him into the UFC Hall of Fame Class of 2020.”

Randleman will join Georges St. Pierre (modern wing) in the Class of 2020 for the UFC Hall of Fame. 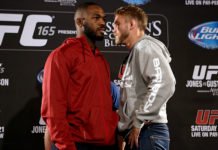