Norfolk, VA — There’s a few things Violent Bob Ross would change about his UFC Norfolk performance if he could.

For one, VBR — Luis Pena, properly — would bring his jiu-jitsu coach with him. “I’m very good at listening to him,” Pena told media outlets including Cageside Press post-fight. Pena earned a unanimous decision win over short-notice replacement Steve Garcia Jr. at the event. He spent a lot of the fight on Garcia’s back. Ultimately, he couldn’t find a finish however.

Given the opportunity, he’d make it a more exciting fight. “I set very, very, very high expectations for myself, and I have very high standards for my performances, and I didn’t meet them tonight,” said Pena, who then apologized to fans for the showing.

Between multiple opponent changes ahead of the fight, and meeting his biological little brother for the first time, Pena had never had a Fight Week quite like the one ahead of UFC Norfolk. “Not at all. There was a lot, there was a lot to handle this fight week,” he admitted. “It was a lot of pressure. But I’ve always had this philosophy, ‘pressure makes diamonds.’ That was the name of the episode when I won on the episode of The Ultimate Fighter. Pressure makes diamonds. It wasn’t the best cut, but that pressure went out there and made a diamond of my performance.”

Pena’s Fight Week was even busier when you add in that he went out and met members of the military, and toured the naval base his biological mother worked at. Both his mother and biological dad are military members. “She was stationed back at Norfolk in 2013,” Pena explained. “Ironically I ended up getting to tour where she worked. So it was really cool to see where my mom does everything, and to see where my dad does everything as well.” The crew of the gun ship Pena was touring, knowing he was the child of service members, also signed an American flag for him.

As for what comes next, Pena will have to put his disappointment behind him and get back to work. While he’s not the call-out type, there’s an opportunity to earn a unique feather in his cap moving forward. “Now that I’ve beat, technically, the guy that was the LFA 35 champ, and one that would have been the 45 champ, let’s make it the trifecta and go after the 55 champ, in Austin Hubbard. Why not? He’s fighting [Mark O.] Madsen next week. I only say that because I have a lot of respect for Austin. He’s a good fighter, he’s a great fighter. If he would want to do it if he gets past Madsen, let’s go!” 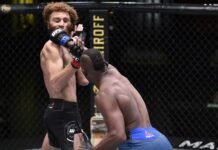 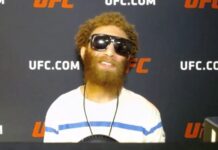