Nate ‘The Mule’ White moved to 5-0 as an amateur mixed martial artist when he beat Brian Cosco via TKO at NEF 42 in Portland, Maine Saturday night.

White landed a huge front kick right out of the gate that stunned his opponent and ultimately led to his demise. Following the bout, we asked Nate if he could tell Cosco was rocked after landing the shot. “Oh yeah, when I landed that shot I knew it was over,” White replied. “I could just feel the power behind it, the way it kicked his head up, I knew it was over after that.”

We proceeded to dig to find out if this shot was instinctual, or something White saw in watching tape on his opponent. “I knew a kick would be open, you could see in the beginning of the fight we kind of just stand there and I was just waiting for him to open up a little bit and as soon as he did I threw the kick.”

White knew the importance of beating a veteran fighter like Cosco. Nate is early on in his career, and Brian Cosco has had more then double the amount of fights as the undefeated amateur. “It was big. Like I said coming in I knew Brian was a tough dude, so to be able to beat him and beat him in the fashion I did, it’s hard to put into words how great that feels. I’ve never felt something like that in my life.”

The Mule went on to discuss how amazing it was to watch his head coach Jesse Erickson spring the upset over previously undefeated prospect Josh Harvey in the Co-Main event of the evening. “I’m not surprised. I know how hard he works, I know what his skill level is, I wasn’t surprised at all. I know what he’s capable of and he stuck to his game plan and worked it like a wizard.”

Finally, we look forward to NEF 43 in April. “I do have a fight for NEF in April, I’m not allowed to say names yet but I’m excited to go there, I love that venue.”

Check out our full chat with Nate White below! 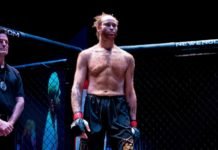 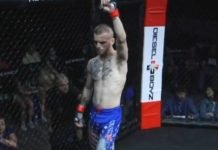 Nate Boucher to NEF flyweights: “My takedowns can’t be stopped.”